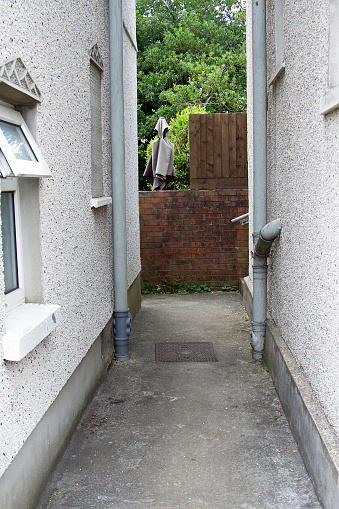 We had an interesting situation present itself to us last week.

The seller of a home that appears to qualify for a laneway house build received a strong offer to purchase the property, but it was conditional on successfully negotiating a Limiting Distance Agreement (or “LDA”; more on this later) with the property owner next door.

All other conditions at the subject property appear to make it an excellent candidate for a fairly large laneway house, except that the emergency fire access route down the side of the home does not meet the 1.0m (about 39 inches) width requirement, all on the subject property.

When we look at that space, it’s physically large enough for a clear 1.0m pathway, but some of that 1.0m is on the property next door, in this case one half of a semi-detached home.

Very late in 2019, the City of Toronto put in place a mechanism to still allow for this emergency access path, even when it is shared between two property owners.  It’s called a Limiting Distance Agreement, or LDA.  It allows the two neighbours to register an agreement on the title of both homes, similar to an easement agreement, but in this case strictly for the purposes of emergency access to the laneway house.

The idea is, that once this LDA is in place, it’s designed to prevent either homeowner from making modifications to their homes that would in any way encroach on this 1.0m emergency pathway.  So in perpetuity, the LDA ensures that as long as this pathway is identified as the emergency access route to the laneway house, there will be no obstacles restricting the size of this pathway.

Now, in this particular case, it should be noted that the neighbour is also likely qualified for a laneway house build.  And because they are one half of a semi-detached, this same pathway would also be the basis for their emergency access route should they decide to build a laneway house.  So to some extent the LDA can be mutually beneficial, there is some reciprocity principles in effect when it is executed between two neighbours, in many (but not all) cases.

Of course, the unique situation here is that the owner of the home for sale quite rightly does not want to get involved in brokering a deal for an LDA between their current neighbour, and the potential buyer of their home.

And, from what we understand, the buyer’s agent has indeed initiated talks with the neighbour directly, and those talks have at least provisionally provided positive results.  The neighbour is interested in perhaps providing that LDA after the sales transaction has closed, and the then-new-owner begins the process of obtaining approvals for their laneway house.

Of course, the buyer’s agent wants some very firm confirmation that the agreed-upon process will be fulfilled, so it’s possible some lawyers will get involved now, to iron out those details – an agreement between the new buyer and the neighbour of the house they are buying – before the sales agreement for the subject property becomes unconditional.

We are eagerly awaiting the outcome here, and when we learn of it, we’ll be sure to post here.