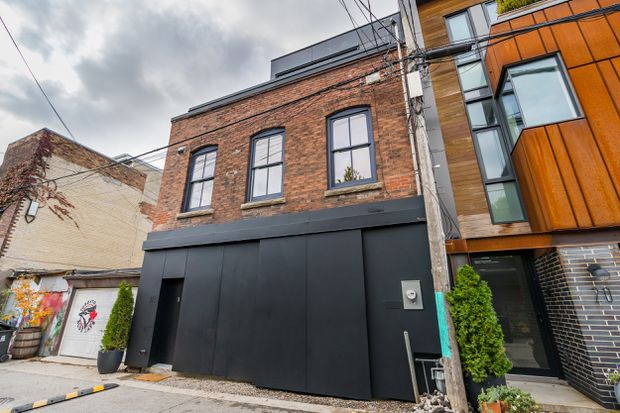 From the Globe and Mail:

Craig Small and Patrick Fay had been running their media and film production shop from offices in downtown Toronto for about 12 years when they started to think about expansion.

Instead of continually renting space, the partners at the Juggernaut figured, they could build a satellite studio which could also serve as a pied-à-terre for the film directors and other creative professionals the company brings in to work on feature films, documentaries, music videos and commercials.

They imagined a nimble space that would serve myriad purposes.

“I spent about three years walking my dog through every back alley looking for an industrial work space,” Mr. Small says. “I was knocking on doors asking people if they would sell me their old automotive garage that was boarded up.” 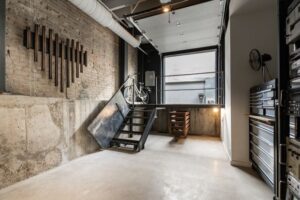 After purchasing the property in 2016, the Juggernaut partners brought in architect Vis Sankrithi of uoai studio and designer Francesca Piccaluga of Piccaluga Design Inc., to revamp the 1860s red-brick coach house.

After about four years of planning, permits and construction, the building which started out as a shelter for a horse and buggy with a hayloft above, provides 2,625-square-feet of work/live space on three floors. 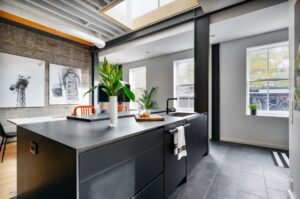 Inside, a steel grate platform runs the full width of the building, suspended above the ground to create the feeling of a “back-of-house” stage. The metal stairs to the lower level are retractable. When they’re in place, lights project the shadows of people climbing or descending the stairs onto the outer walls.

Mr. Small added more theatrical touches to the space, which can be used as a production studio or a garage. Edge-lit Heart, a light sculpture he created of animated LEDs and acrylic panels, was commissioned by Warner Music and singer Michael Bublé for the 2019 Toronto Light Festival, and now hangs on the wall. 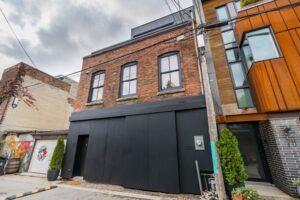 Upstairs, the main level is an open-concept space with a ceiling that soars 20 feet to a mezzanine.

Steel frames provide stability for the brick structure and support the mezzanine above.

Mr. Sankrithi and Ms. Piccaluga also used the steel frames and a turning metal staircase to add storage areas and create spaces that are gradually revealed as people walk through.

“The interior flows through a series of intriguing, gradually-revealed ‘moments,’” Mr. Sankrithi says.

MORE from the Globe and Mail